History of a Baglio in the heart of Sicily

i Carusi, country retreat with pool and restaurant at Noto

I Carusi, country retreat with pool at Noto, is an oasis of peace in the heart of Sicily, a few kilometres from the Vendicari Nature Reserve, and designed with the utmost respect for the environment, as well as to give expression to the concept of a wellness retreat. The name, which means ‘the boys’ in Sicilian, is a pet name created from a typical surname on the island. The spaces, materials, energy sources, even the technology added: in our country retreat everything is designed to be sustainable, and reduce the environmental impact, in exchange for the bountiful generosity of nature.

Restored in 2016, the buildings of an old country house, a baglio, are now a stylish boutique hotel with five rooms and suites, an infinity pool and a restaurant. The building sits in six hectares of land, with almond and olive plantations.

A love of both nature and agriculture, passed down from grandparent to grandchildren. A sincere, genuine love, starting with organic pink grapefruit produced from one hectare of land at Acireale, in the Catania region in 2006. In 2011, the organic farm business of Simona Privitera, chef and owner of i Carusi, expanded and found the ideal place at Noto to combine her twin passions, for agriculture in tune with nature, and for hospitality. 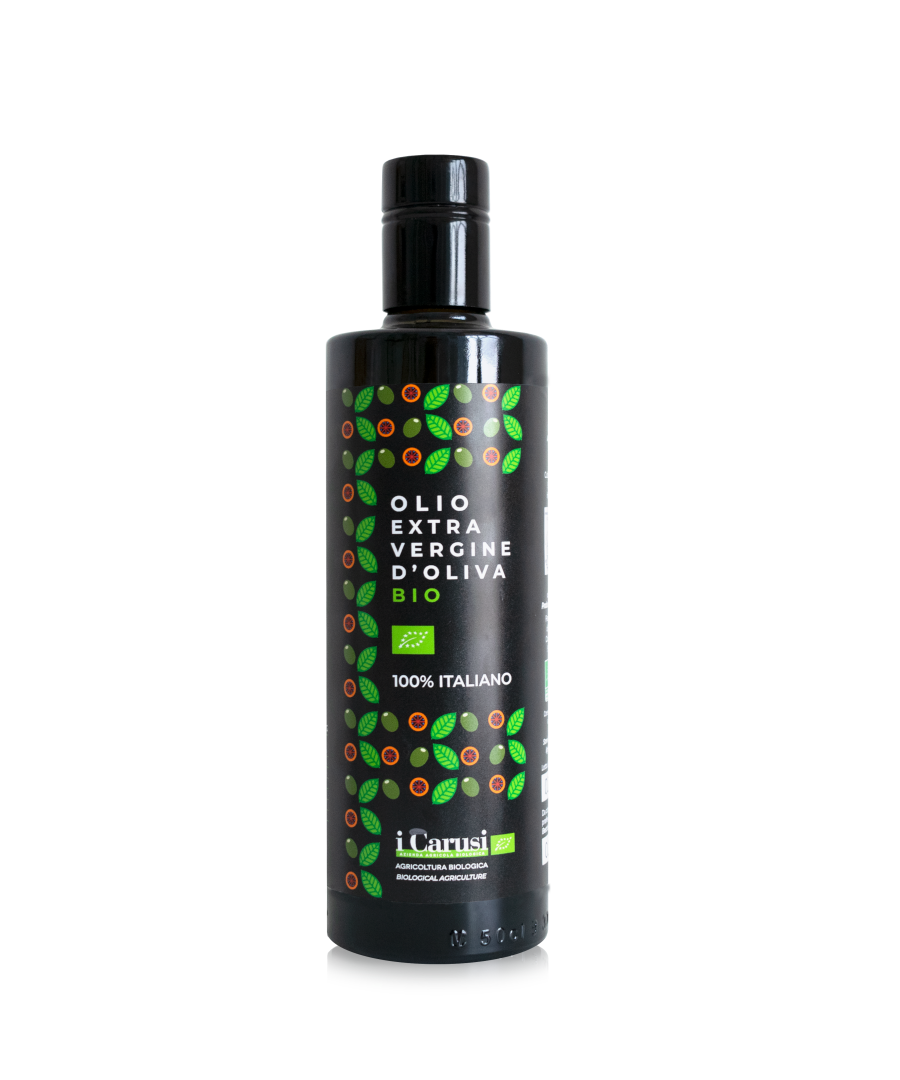 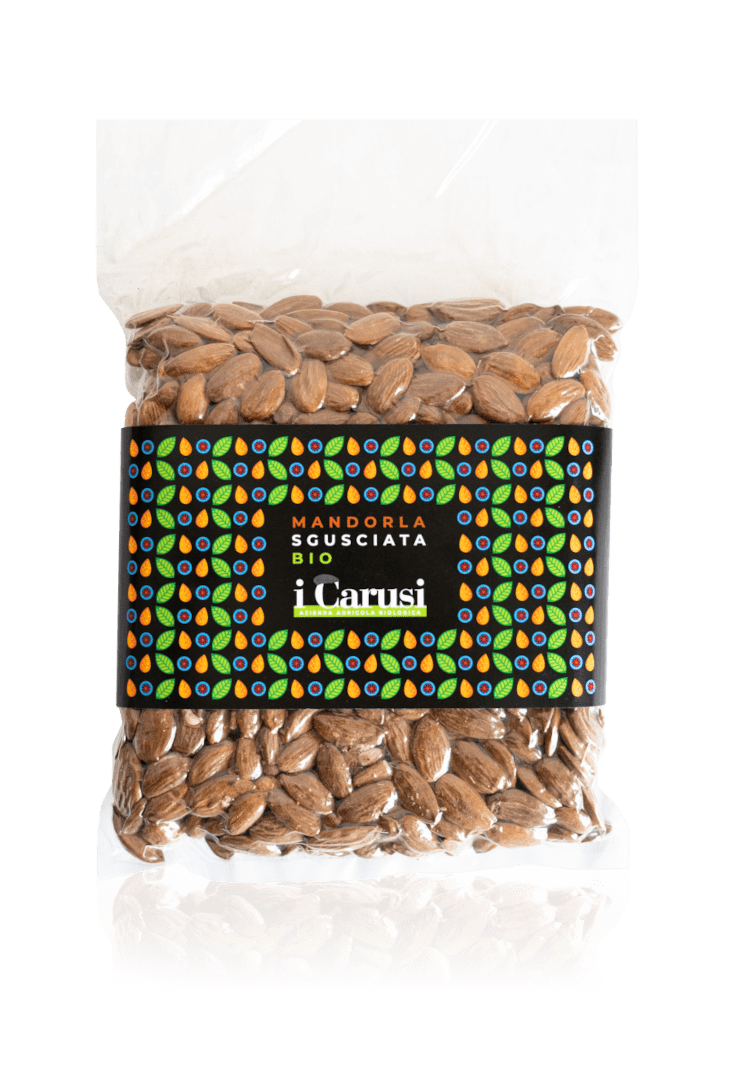 The organic farming business of i Carusi in Noto, in the province of Siracusa, cultivates six hectares of land, with passion and respect for nature, growing olives, almonds and lemons. I Carusi produces good, healthy food crops, with extraordinary organoleptic properties, 100% natural and proud of being made in Sicily. The Pizzuta di Avola is the most highly-prized almond in the world, chosen by confectionery makers and in general used for the best quality cuisine. La Fascionella is a typical Syracuse variety, characterised by a large, ochre-streaked shell. Olives are harvested by traditional methods, producing our top-quality, extra-virgin oil, which together with the organic pink grapefruit grown on the farm at Acireale, are the jewel in the crown of i Carusi.
EXPLORE THE SHOP

Our organic products to buy

Almonds, extra-virgin olive oil in bottles or cans, citrus preserves, as well as natural soap, made with lavender, hypericum oil and helichrysum oil: discover all our strictly organic, zero-kilometre products produced by i Carusi’s farming business.
Taste the bountiful fruits from the Sicilian countryside in Val di Noto whenever you like in your own home, and benefit from the natural goodness of the flowers and plants, a sensory experience available with a few clicks!
BUY FROM THE SHOP 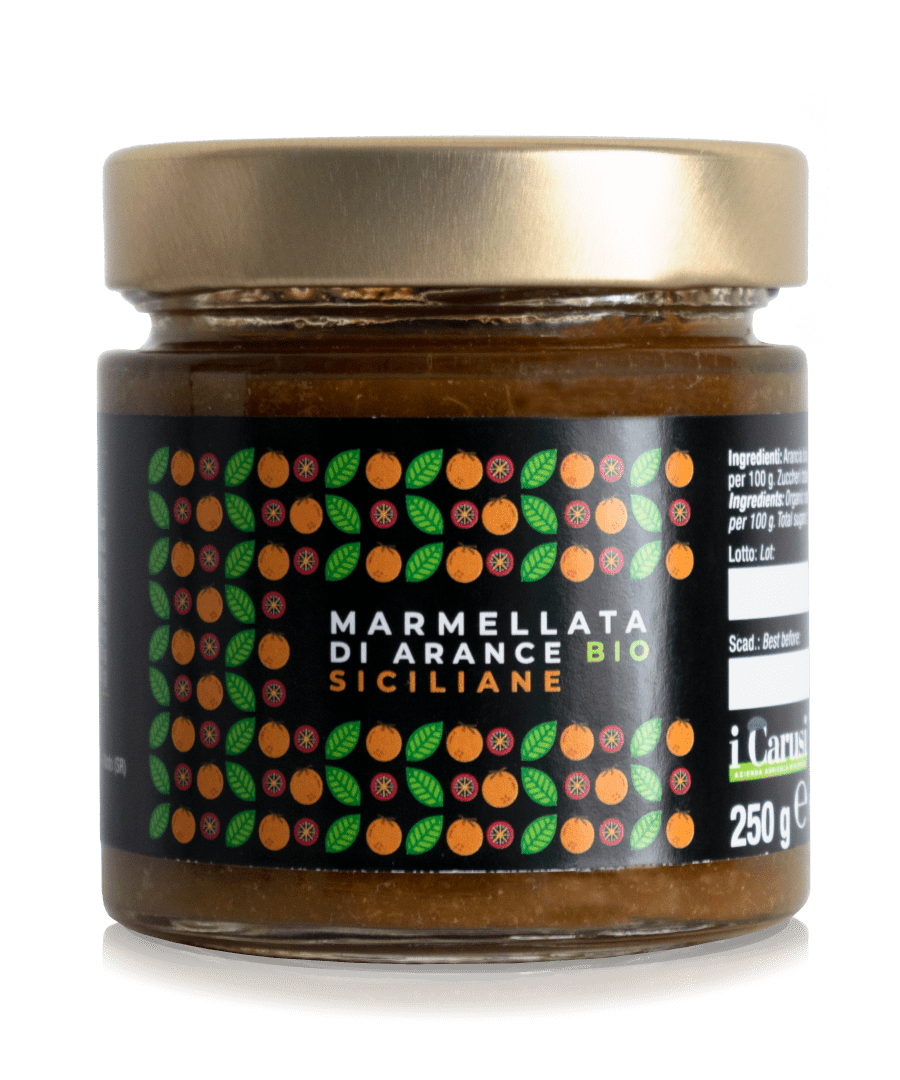 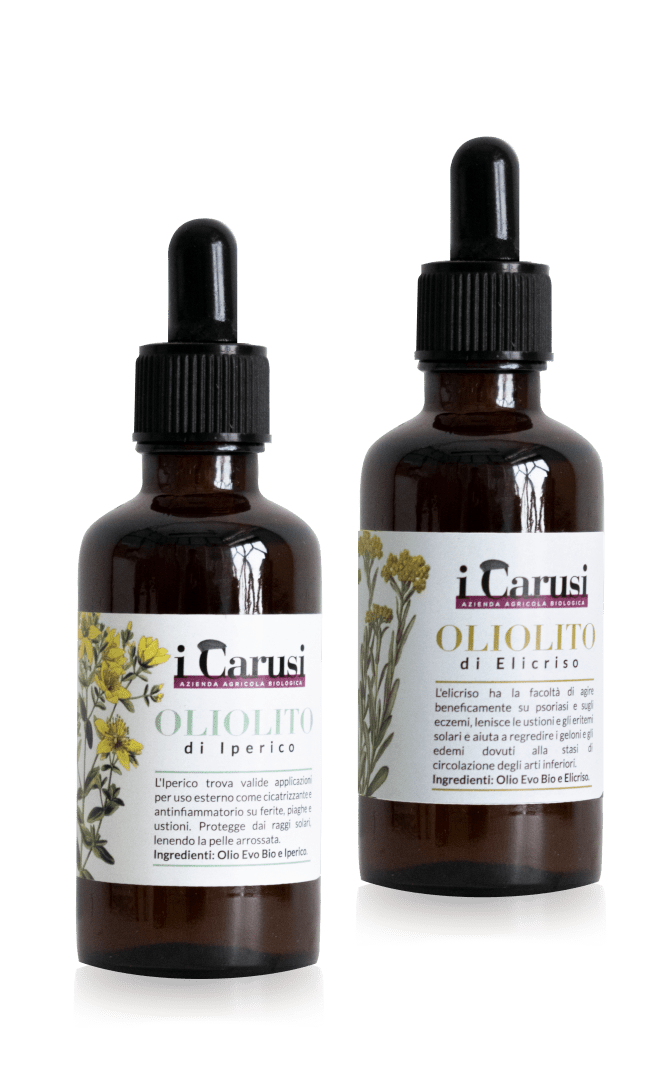 The goodness of an organic breakfast

Our morning luxuries, for the best start to the day

Wake up at i Carusi country retreat, surrounded by the sounds of nature, and pampering that continues at the table when we serve your breakfast. Home-cooked, fresh, strictly organic, zero-kilometre produce, the daily breakfast restores and delights our guests, who can eat outside surrounded by the colours and perfumes of the Sicilian countryside. At i Carusi, we welcome you with simple, watchful care, trying to offer you unforgettable moments of happiness, peace and quiet. Tastes, smells and colours, unique to the unmistakable features of the Sicilian landscapes of Val di Noto.
DISCOVER THE BREAKFAST 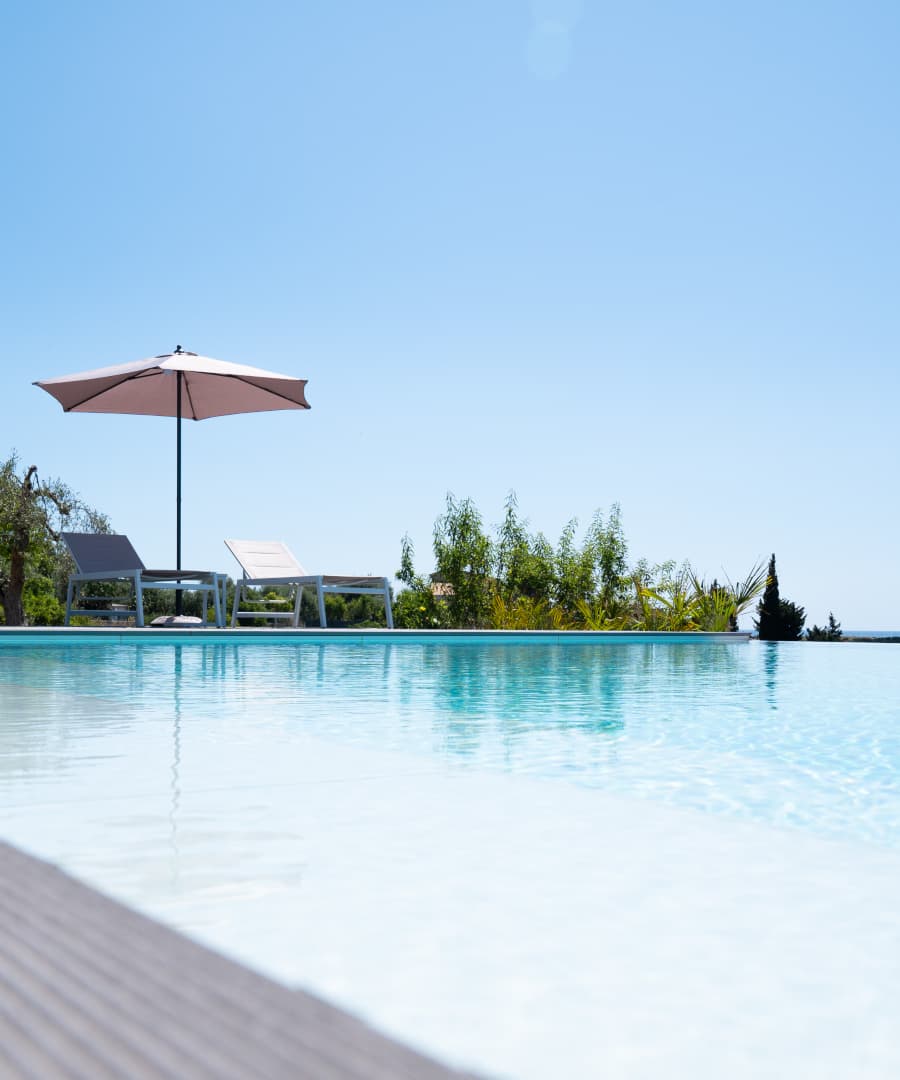 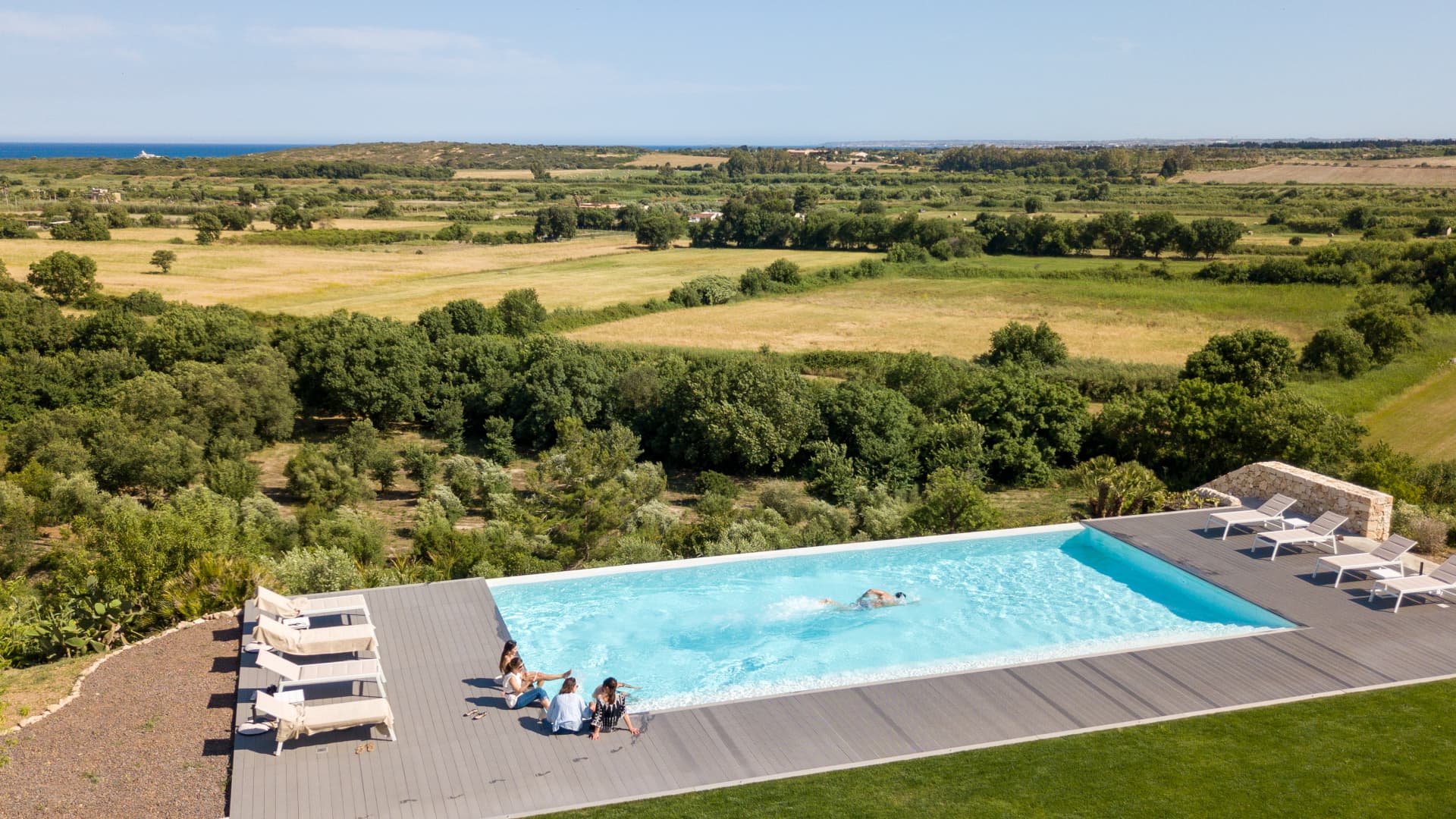 A modern infinity pool, for relaxing in the boutique hotel

Perfect, relaxing times await you in the ultra-modern, infinity pool of i Carusi boutique hotel in Noto. An oasis like no other, designed with respect for its natural surroundings, our pool is the ideal place for a dip on a hot summer's day, or to sunbathe quietly, stretched out on a chaise longue beside the pool. The pool, looking out onto the green, open landscapes of the Vendicari reserve, lost in the blue of the sea on the horizon, is a true corner of paradise, where you can relax and admire the landscape of the wellness retreat. Surrounding the 14×17 metre, low-chlorine pool, is a wooden walkway, beautifully furnished with sunbeds and umbrellas for you to lie back and perfect your tan.
DISCOVER OTHER EXPERIENCES

Sleep in the cradle of civilisation, an exclusive vacation at i Carusi 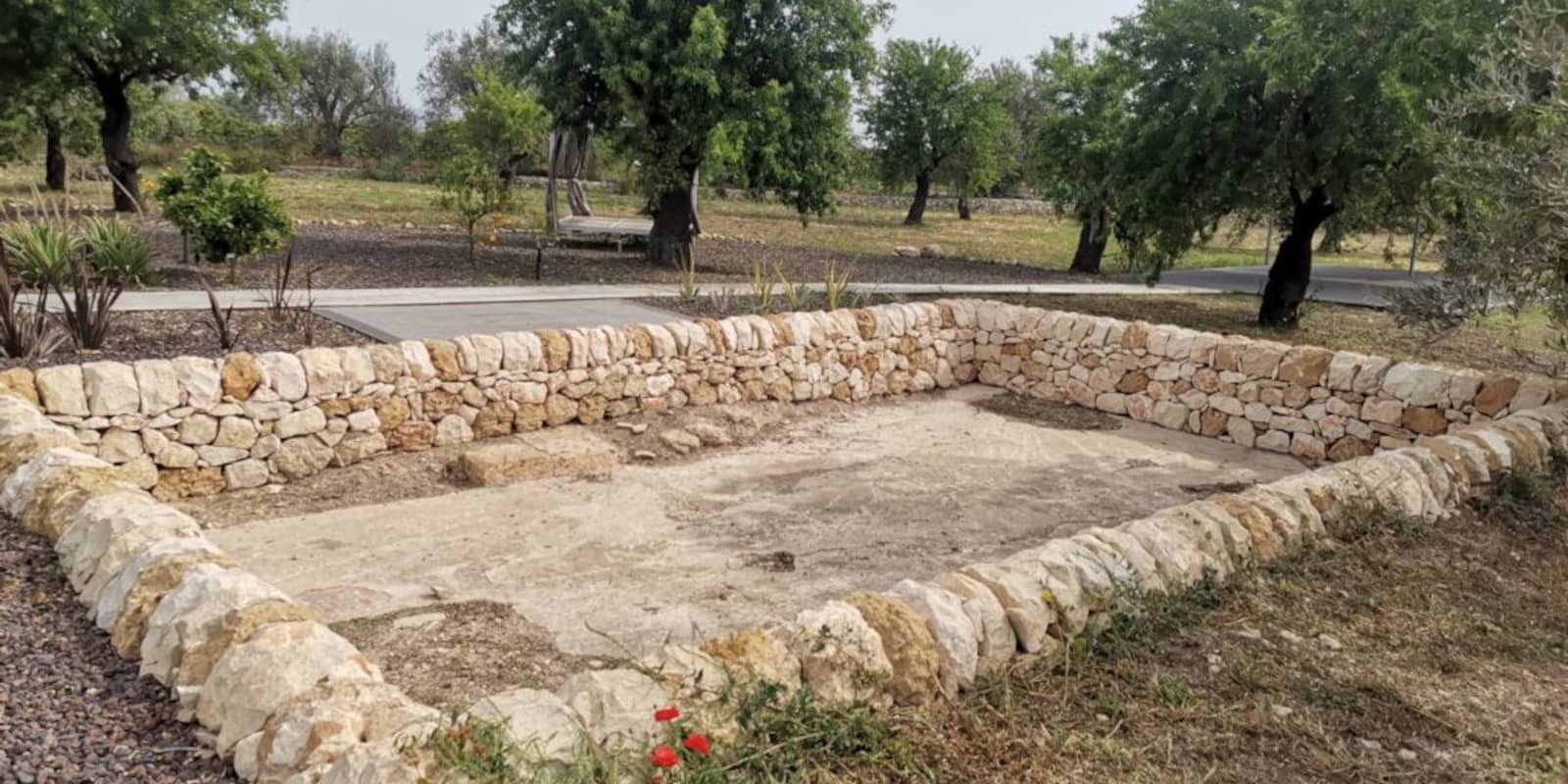 The Roman-period mosaic, probably dating back to the 2nd century BC, discovered in 2020 during excavations to build the swimming pool, is an open-air archaeological artefact, arousing indescribably emotions in those fortunate enough to admire it.
The guests at our country retreat will experience the wonder of sleeping surrounded by history, where ancient Romans once lived. The boutique hotel is actually in a direct line from the magnificent Roman villa at Tellaro, and lies in the middle of the outstanding Val di Noto archaeological site.

“The mosaic pavement, about 35 square metres, mirrors the features of the so-called opus signinum, formed of a mortar base in earthenware (small fragments of brick and tile) and lime, dotted over much of the surface with flakes of limestone. Part of the mosaic shows a sequence of small crosses formed of four white tiles arranged around a black centre. The mosaic pavement probably extended beyond the currently visible excavation, and with the little information that can be deduced, it is not yet possible to determine the purpose of the space where the mosaic is laid.
The mosaic is reasonably well-preserved, and still covered by a mortar which obscures the surface, showing several gaps, detached tesserae and micro-cracks. It has also suffered organic damage. In the coming months, the opus signinum will undergo conservative restoration, under the technical direction of Dr Barbara Di Natale, a qualified restoration and conservation specialist, who will be able to reveal the part of the mosaic layer within the excavation area, and stop the on-going deterioration”.

I Carusi is your home in Sicily, in Val di Noto.
A place to relax and regenerate.
Keep in touch and discover the promotions reserved for friends of i Carusi.

Book now your stay at the best rate!

Or write to us to request a quote that best suits your needs.
REQUEST A QUOTE

Discover our offers and get ready to live the essence of Sicily.